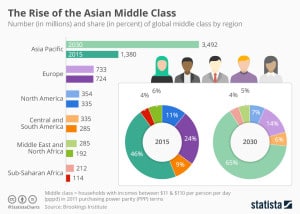 We probably all suspect that the growth of the middle class will come from the Asia Pacific regions, but I doubt many would think it could grow from less than half of the world population last year to almost 2/3 of humanity in less than 15 years.

According to projections of the Brookings Institute, that’s what we should expect.

Within the next 15 years, the middle-class (a.k.a consumers) population will grow by as much as TWICE the total of Europe and the USA combined TODAY!

Another 2.1 billion people willing and eager to consume…

Time to rethink your strategies!

With Brexit vote coming up next week and the polls too close to call the outcome, we reflect on the impact Brexit will have on the VC industry....See More

Berlin on the heels of London